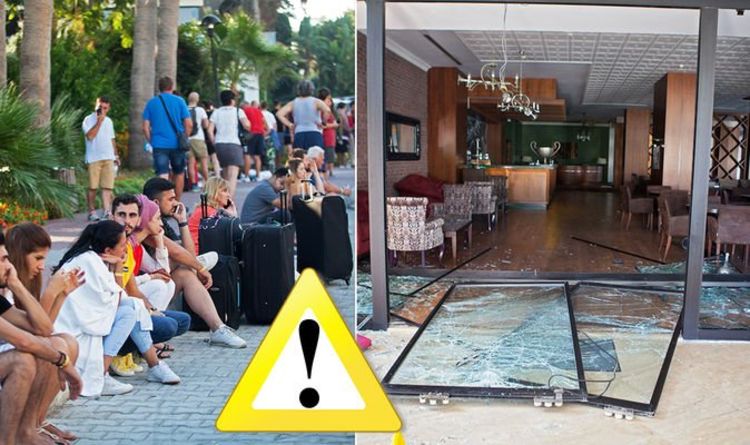 Cyprus holidaymakers staying at the Acapulco hotel in Kyrenia were evacuated this morning. The emergency procedure came as consecutive explosions and a fire occurred in a military zone nearby. The blasts took place just before 2am local time east of Kyrenia in Turkish occupied northern Cyprus, Turkish Cypriot media reports. Minor injuries were caused by glass blasted by the explosions – shocking images from the scene show the shattered glass doors at the Acapulco hotel.

Residents in the near the military depot opposite the Acapulco Hotel in Ayios Epiktitos were also evacuated and electricity in the region cut off as a precaution.

Fire broke out in the arms depot at the base in Catalkoy, west of the town of Kyrenia, without causing any casualties, police said.

The fire was put under control at around 7am, local media reported, and the cause of the blaze and explosions will be investigated today. It’s currently not clear which came first.

“An ammunition depot belonging to the Ammunition Division Command in Girne caused an explosion at 01:30 due to a yet undetermined reason,” Turkey’s Defense Ministry said on its Twitter account.

“A fire broke out in an arsenal within the military zone and there were consecutive explosions in the eastern part of Girne,” Kudret Özersay, Deputy Prime Minister and Foreign Minister of Turkish Republic of Northern Cyprus (TRNC) added on Facebook.