British Airways strike: Why BA passengers are NOT entitled to compensation – what to do 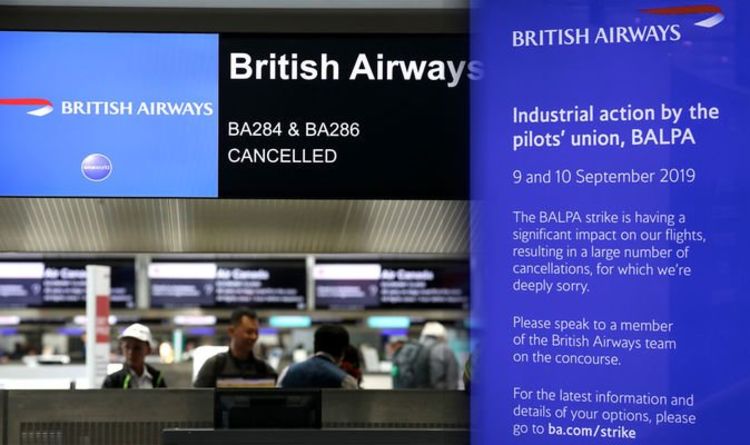 This is because British Airways cancelled flights more than 14 days in advance, and as such are not liable. Explaining the rules, Nicky Kelvin from The Points Guy said: “You may be aware of EU261 rights for delayed or cancelled British Airways flights, which are surprisingly easy to claim online. “Because British Airways cancelled all of these flights more than 14 days in advance of the date of the flight, EU261 compensation is not payable.” There may be some instances in which customers can claim compensation – although not always directly from BA. Martin Lewis explained how to try and claim during an appearance on This Morning yesterday.

What about those passengers who are stuck abroad? Are British Airways liable for costs they incur?

Nicky continued: “If you are abroad and your flight home was cancelled as part of the strikes with your rerouting resulting in additional costs, such as unexpected additional nights accommodation, BA has confirmed you are entitled to claim reasonable compensation.”

However, the news is not as good for those who have lost out on pre-booked hotels.

Nicky explained: “BA has confirmed that where your trip is abandoned because the flights are cancelled, you cannot claim the cost of non-refundable hotel accommodation unless it was booked through BA Holidays.”

Most policies will not pay out more than a small amount – and even then only for long delays. 12 hours or more is the industry standard.

Some policies have cover for “consequential loss”, for example a hotel booked independently of the flights – but travellers will need to check their insurance policy carefully to be sure.

If the policy does cover you, the Association of British Insurers said on the whole, if passengers booked when the intention to strike was known but the precise dates of any industrial action were not, then the policy should continue to cover you as normal. But – if the days of the strikes were confirmed before you booked the holiday or the insurance, then the policy would likely not cover you for any strike-related claim.

Will my credit card cover my losses?

Travellers may be covered by Section 75 credit card protection, which makes the credit card provider jointly liable if the flight cost more than £100.

However, you are only covered if you bought the flights directly from the airline, not from a third party provider.

What about flight delays, not cancellations? Am I entitled to compensation?

Passengers are entitled to sensible care and assistance – so food, drink and in case of being stranded abroad, accommodation. In this instance, make sure to keep all receipts.

Depending on the length of the flight, and how late the arrival at the destination, further compensation could be owed.

Why are British Airways flights cancelled?

Flights are cancelled due to strikes. The majority of BA’s 4,300 pilots based at Heathrow and Gatwick are walking out over pay – they are currently paid an average of just under £90,000.

This increase would have seen some pilots’ pay packages swell to around £200,000 a year.

The strikes were voted for by 93 per cent of BALPA BA members. The union’s general secretary, Brian Strutton, said: “Our members’ resolve is very strong and they remain very angry with BA, but they also want to leave no stone unturned in trying to find a resolution to their dispute.”